When Tamoran Dal Nava proposed to create a Talossan Activity Index, I had risen to the occasion and built and automatic calculator, as explained in last month’s issue of Preßeu Zespenat. The index was wonderful to pin-point the differences in activity between the various days or weeks and more importantly, showed the relative quality of threads. I
Read More
When I became the first minister of foreign affairs of the Republic of Talossa, my first project had been to try to negotiate a peace treaty with the Kingdom of Talossa. My second was to create ESTO, the Ephemeral State Treaty Organization to become a sort of UN of Micronations. Here is the last draft
Read More 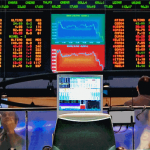 At some point in 2003, Tamoran Dal Nava proposed that Wittenberg posts was akin to the Gross National Product of other countries: by measuring the posts of Wittenberg, we would be able to get an idea of the volume of activity in Talossa. Today, others have made the same observation independently but little did they know that
Read More
Right now, Talossa has a 200 member Cosa where each of the Cosa member can hold up to 30 seat. While Talossa always had a proportional system for electing Cosa Members (except for the 3th Cosa which had ranked ballots), the method for distributing those seats wasn’t constant over our history. There are talk to
Read More