If you are from the US, you might or might not know that your postal code system is one of the worst of the modernized world.

In case you are not familiar with the US zip code maps, here is a refresher, pay close attention to the exceptions: 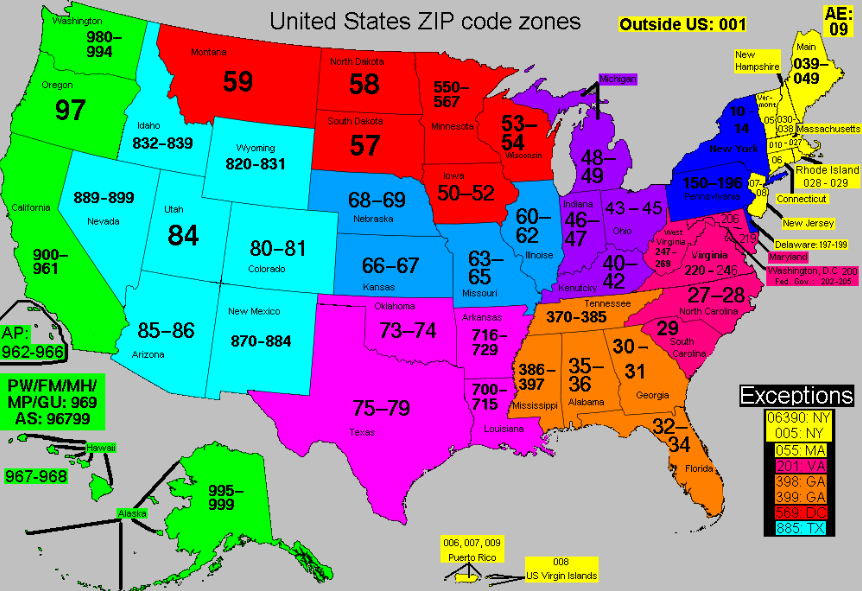 If we compare to it’s Northern Neighbor, Canada, here is the postal code map: 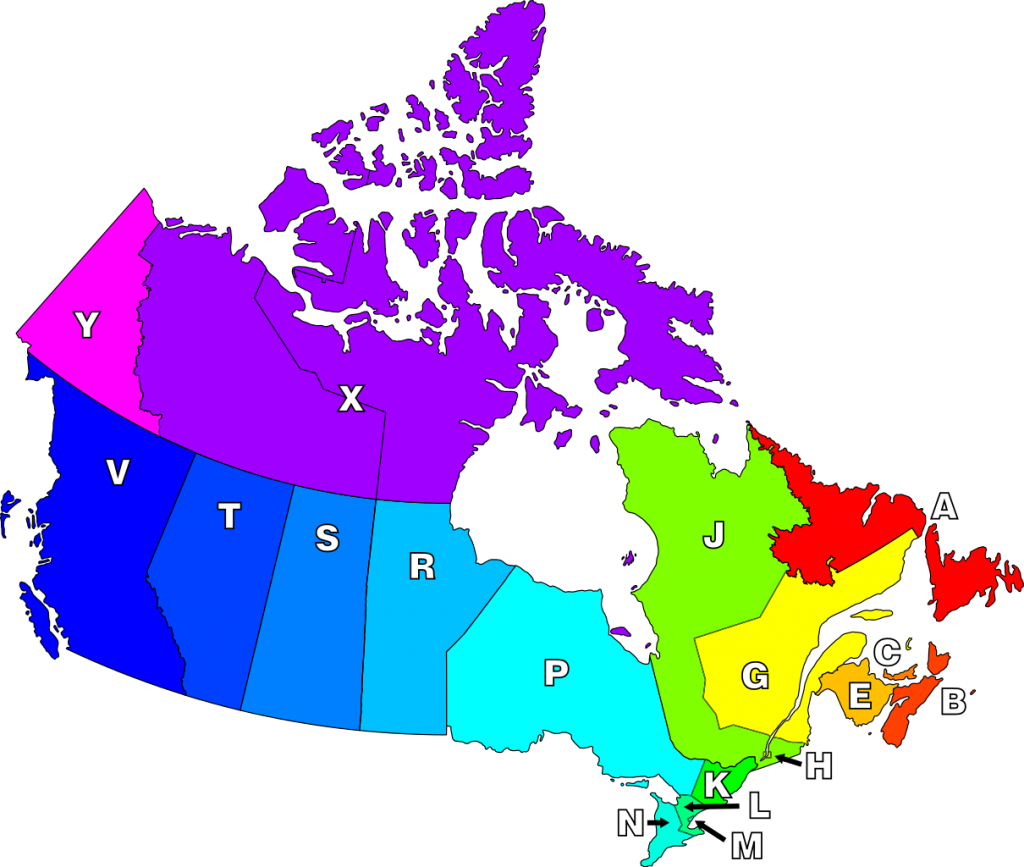 Quickly, we can see that most provinces have a single letter and that only the 2 most populous ones have more than 1 (Québec and Ontario).

Montreal gets it’s own letter (H) as does Toronto (M)

The first 3 digits are the Forward Sortation Areas, which allows to route a letter to a specific geographic area, while the last 3 digits are local delivery units or the specific area served by the postal code.

Some institutions get their own postal code, such as universities and hospitals. If they end with 0, the destination is a postal office, while 9Z9 is reserved for business reply mail.

Using the US system as an inspiration would be, for a Canadian like me, and aberration and so, I am proposing to use a system inspired by the Canadian system, but composed of 5 digits, like the US, following  this pattern:

Which would make the Talossan postal codes significantly unique compared, as far as I know, to any other postal code system on the planet, while paying homage to the 5 digit US ZIP codes.

Just like in Canada, each position would have a specific purpose as described below.

The first character of the postal code will be the province, in the following traditional order:

Wait, Pengopats isn’t a province, is it? No, but it still gets a postal code, our penguin citizens need to get mail, don’t they?

I am fully aware that this assignment doesn’t seem allow for another province, but 0 is still available.

If a province has more than 10 Cantons, 2 or more cantons will need to be merged and get a joint letter.

The only exception to that rule are for postal codes starting with 1Z, which is for both the government of Atatûrk, and the official offices of the Kingdom (since the capital of the Kingdom is in Atatûrk).

When the second Character is W, the destination isn’t actually in Talossa, but rather, in the Wisconsin state catchment area for that province.

The characters N,M,P,R,S,T,V and Y are used for the catchment area of the province outside of Wisconsin. Characters O,Q and U aren’t used in our system, like for Canada, and W and Z are used for other purposes above.

We would use S for the Catchment areas within the United States (but outside Wisconsin) and the rest of the letters for the various other countries, possibly grouping them into geographic areas if more than 7 non-us countries are assigned to the catchment area for that province.

If the 3rd Character is a zero, it means the postal code is special. For example, 4W0 might mean the administration of the catchment area in Wisconsin.

In the case of the national government in Atatûrk, for example, the postal code would start with 1Z0, to distinguish it from the Atatûrk government, which would use 1Z1 to 1Z9 (if needed).

The third Character will be used to determine the general area within the zone delimited by the first 2 characters.

At this point, the last 2 characters are used to refine the destination so that for every postal code, ideally (In Talossa at least), only a single occurrence of each house number is present.

It is not possible to assign such precision for foreign countries (or even Wisonsin), so instead, the first citizen for that area gets assigned the code A1, and the second A1 and so on, ignoring digits 0 and 9.

I, for example, would have the postal code: 1N2A1 since I was the first citizen from Québec to join Atatûrk.

Where do we go from here?

Unless this idea is utterly opposed, I will start making a map of Talossa with postal codes assigned up to the 5 digits. It will take a long time, but slowly, we should get there.

Does it really matter?

Of course not, but if, like me, you find geography fun, let’s have a postal code assignment party together!