The RUMP published its manifest on Wittenberg, and we have reproduced it here:

We would use our assets! Thousands of stamps – literally thousands of stamps have been sitting on a shelf gathering dust. They’ve been sitting there for years, with no attempt to sell them. Even after this was brought to the Government’s attention months ago, nothing was done. It’s an almost criminal waste of assets. We raised a lot of money in the stamps Kickstarter, and we could have been earning a return for years by promoting our stamps to Talossa and to the wider philatelist community. Most of the proceeds should be set aside in a special fund to buy a second issue, someday.

We would post mandatory reports and speak to the people! The Talossan Government Transparency Act passed with universal support, but now it just gets ignored because the Seneschal is not much of a presence. Every two months, the government is supposed to report on what his ministers have done… we should have had three reports by now, and we have none!

We would resume issuing ID cards to interested citizens! This would be part of our continued campaign to bring Talossa off of Witt, and by charging a nominal cost for postage and production we could give all interested citizens a real and physical example of their citizenship to show off!

Lower registration fees without just slashing income! Financial responsibility is important, and it would be irresponsible to simultaneously call for slashing registration fees and increasing our outlays! But if we charge small fees for IDs, solicit donations, and sell stamps, we could probably cut registration fees by half for the next election. We should actually keep track of the math and lower those fees!

Our candidate list gives a very good idea of where seats will go. We were happy to give two seats to Tra, who did a tremendous job, because we had confidence he would fight for the principles of our party. We don’t believe in an ironclad voting list, though our party was the first party to publish voting lists at all.

Here is another version of their Manifest, with actual images: 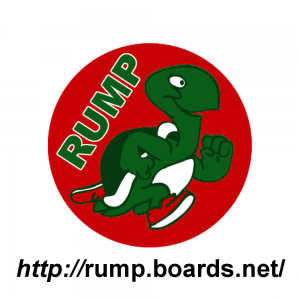 ID Cards – We should resume issuing ID cards to interested citizens, charging a nominal amount to cover the cost of postage and production.

TalossaWare – We should open and restock TalossaWare, and take steps to promote Talossa-themed goods on social media and Wittenberg. 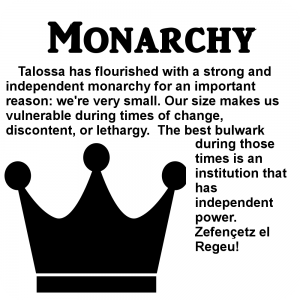 Use Our Assets – We should begin promoting the sale of stamps to Talossa and to the wider philatelist community, and set aside the proceeds in a separate fund for a second issue someday. There’s thousands of stamps that could be raising money and spreading the word about the country. 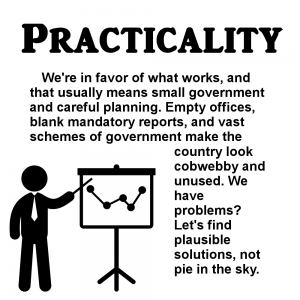 Donations – We should publicly solicit patriotic donations once per year for the span of a week (or on a similar non-annoying schedule), now that that approach is an official part of our budget. Laws should not be passed and ignored… if it’s too hard, then don’t promise to do it!

Lower Fees – All of these methods of financing the country should enable us to lower the cost of party registration fees, which will make it easier for more Talossans to organize themselves and express their democratic will.
Accountability – A public Civil Service Committee, with parties held accountable when their members delay the process with absences. 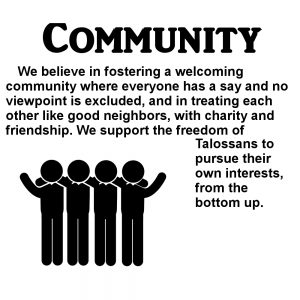 TalossaWiki – This useful modern public archive of our history, culture, and laws was conceived and constructed by the RUMP. It’s become an indispensable asset in only a few years.
El Lexhatx – The former system of scattered and half-remembered laws was impenetrable to everyone but experts. Some statutes contradicted each other and some were lost to history. It was difficult and unfair. It has been replaced by a single legal code, thanks to the RUMP.
Stamps – Stamp legislation was passed and the stamps were Kickstarted and issued successfully under RUMP administrations.
Reunision that preserved the Organic Law and monarchy – For years, the Republic of Talossa said that the only way they’d accept any sort of reunion would be if the Organic Law and the monarchy were offered up as chips for the bargaining table. Reunision happened thanks to the joint efforts of people from many parties, but the RUMP avoided the easy quick solution, and held the line until we were all ready. 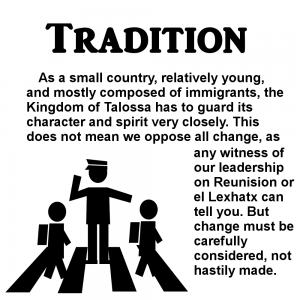 Census – The 2009/XXIX census remains the only broad snapshot of Talossans as a people, offering current and future Talossans a view of what kind of person is a citizen at this point in time. It was a difficult affair to make happen while also safeguarding everyone’s privacy, but a RUMP government did it.
Shiny Objects – The official Seal of the Chancery and the official Chain of the Seneschal exist thanks to the ideas and budgeting of the RUMP, to be treasured and passed on through office-holders. 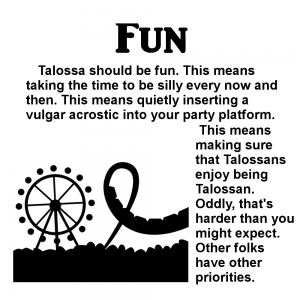 Terpelaziuns – One of the most important ways for opposition and small parties to challenge the ruling hegemony, in the grand tradition of parliaments everywhere.

MIBII financial accountability acts – Keeping the country accountable for where our money is kept and how it is spent.
Secret ballot option bill – The introduction of the secret ballot for voters.

Civil Service bill – A compromise that allowed the expansion of a future bureaucracy, without mandating a host of new empty offices that would still be sitting idle today.

Wittenberg transition bill– Separating the public and private aspects of Wittenberg, without abandoning its historic role. 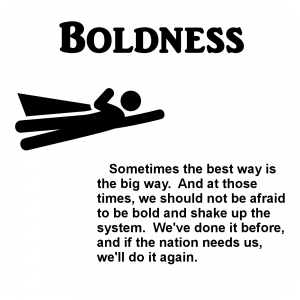 Numismatic Naming acts– Laying the groundwork and vision for coins and establishing our monetary system.

Election Guidance bill – A compromise that will ensure smoother and better elections.

The defeat of the Republican Sentiment bill– Voters have time and time again overwhelmingly endorsed the monarchy.

The defeat of Almost Real Amendment – Would have sacrificed small parties and new ideas for little benefit.

The defeat of Electoral Reform Amendment – Avoided, through a hard fight, an entrenchment of old parties and reduction of representation. 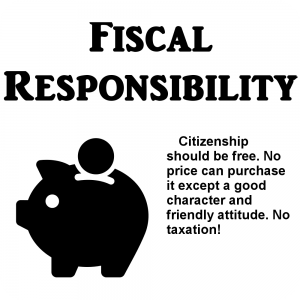 Cabinet Refinishing acts – Laid the structure for the modern government.

Repeal of the House Law of Robert I – Clipping away the old trimmings of autocracy.